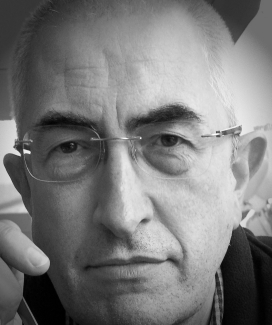 Ian wrote his first story when he was five: an illustrated space adventure he can still visualise today! He has written ever since, his childhood Christmases often seeing new typewriters as top of his list for Santa! Years later, studying English Literature at Southampton University – and, perhaps more importantly, becoming an active member of its Creative Writing Group – elevated Ian’s appreciation of literature and shaped much of his writing, particularly poetry.

Although he carried on writing after Southampton, ‘Life’ got in the way, and Ian’s output was sporadic and of variable quality. However, in the late 1990s he managed to complete his first full-length work of fiction [to later become The Big Frog Theory], and then at the turn of the century combined his love of writing with experiences gained from his professional career to write three books on IT Strategy and Management.

Fiction and Poetry remained Ian’s first love, however, and subsequently he found his fire for creative writing again. This, combined with the discovery of the Amazon Kindle Direct publishing channel and then, more significantly, the IngramSpark publishing platform, led him to create Coverstory books. At this point the floodgates opened, the new venture spurring Ian on to publish both new and old material. It has also allowed him to provide a publication vehicle for others, something of which he remains equally proud.